CACEP  working for the future of the Neapolitan

IT TAKES a special sort of person to devote their energies to a rare breed, writes Sheila Atter. The responsibilities involved when every single litter and indeed every single puppy is important to that breed are enormous. And when the breed is as ancient and special as the Neapolitan Mastiff those responsibilities are even more onerous.

Let’s be frank – the Neapolitan Mastiff is not a breed for everyone. A breed of that size and with such a heritage needs a responsible, experienced owner. Sadly the fad, not just in this country but around the world, for impressive, intimidating guard dogs has led to some indiscriminate breeding and inevitably to much exaggeration of the Mastino’s distinguishing features. 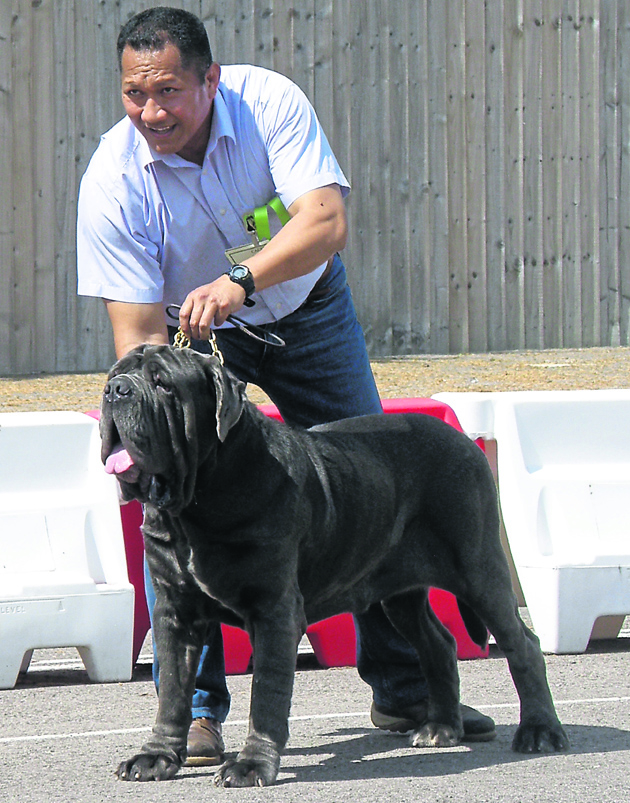 This is the desired type of Neapolitan Mastiff, CACEP believes. Pictured is Freddo dei Mastino Della Rupe with Mateaki Mafi.

Not surprisingly, when the Kennel Club introduced the high profile breeds, now category 3, initiative, the Neapolitan was an obvious candidate for inclusion. Responsible breeders around the world have acknowledged the problems and sought solutions. This brought about the formation of the Circolo Amatori Cane ‘e Presa (CACEP) – an international organisation devoted to the revival of the true Neapolitan Mastiff. In the words of their mission statement:

“The Neapolitan Mastiff of the future will be a dog chosen from individuals with strong muscle tone, dryness and muscularity of the trunk, athleticism with balanced type, general wrinkles, divided dewlap that best represent the unique expression of our breed. 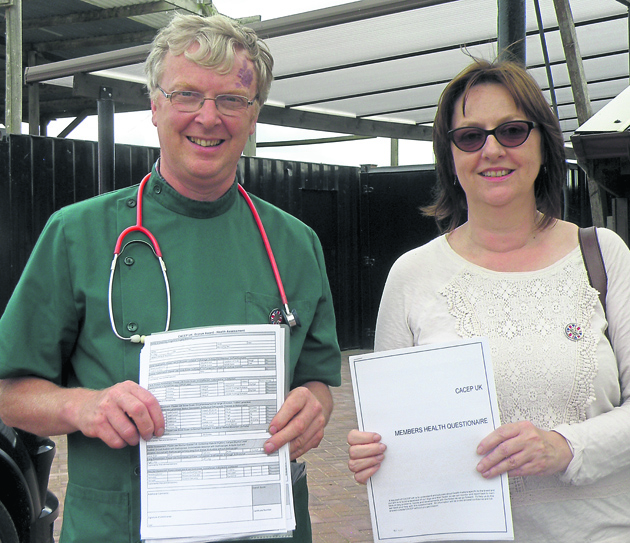 Vet Alistair Mitchell and health campaigner Philippa Robinson were both kept very busy throughout the day, testing dogs for the bronze health award and encouraging everyone to fill in copies of the breed health survey.

“Also, the Mastino Napoletano ‘physical’ must have the soul, the psyche of the true Neapolitan Mastiff, an indomitable dog, indifferent to pain, with a powerful bite, with courage. A dog capable of being an incorruptible, unsurpassed guardian of humans and defender of property. A terrible opponent for anyone. 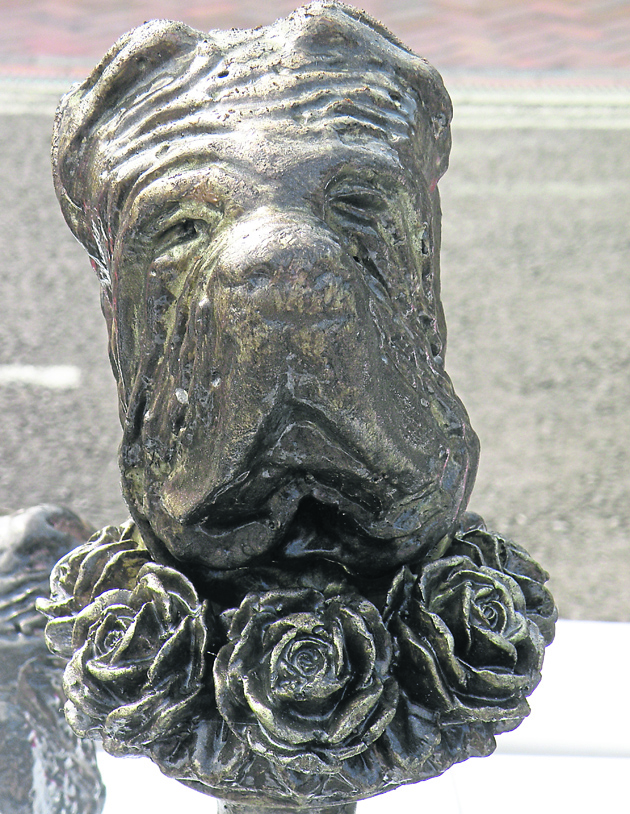 One of the trophies sculpted by Ryszard Kaminski.

In an important step towards achieving this ideal, CACEP UK held its first serious get-together recently, drawing more than 100 supporters and 60 dogs. The overwhelming impression of the day was of enthusiasm and goodwill as well as both a great pride in the dogs and a willingness to accept their faults and to start to discuss where things can be improved in the next generation.

Assessing all the dogs present – from baby puppies through to venerable old veterans – was Salvatore Scherma, a renowned Italian expert on the breed. He was accompanied by the president of CACEP, Paolo Maranto, who set the tone for the day when he presented to Kim Slater, organiser of the UK event, a set of architectural drawings depicting the correct Mastino head, taken from the Italian Standard. These were very proudly added to the magnificent display of artwork that was on show throughout the day.

Salvatore Scherma assessed all the dogs present, giving a public verbal critique on those he considered most typical, pointing out both where they excelled and where they could be improved. This was listened to with great interest by both handlers and the ringside, and everyone surely learned a lot from his encouraging and insightful comments.

While the dogs were being assessed there was also a steady stream of visitors to vet Alistair Mitchell who had generously donated his services for the day. Individual health problems were discussed and, most importantly, dogs were examined from an overall health point of view.

CACEP UK has introduced a health assessment scheme similar to that set up by the French Bulldog folk, with bronze, silver and gold levels, and a good number of individuals were enrolled on the scheme.

Also present was Philippa Robinson of the Karlton Index who is conducting a health survey for the breed. Forms were handed out to all those present and Philippa was busy all day, explaining the importance of the survey.

A break for lunch – pasta of course – was a further opportunity for everyone to socialise. One of the things that struck me was that although a high proportion of the dogs present were not regulars in the show ring there was virtually no dog-on-dog aggression, even when dogs were in quite close proximity. This breed is naturally watchful and protective of their own family, but this was done in a calm and controlled manner.

Later in the day we were to witness a magnificent tribute to the true Mastino temperament when 11 children, some very young, took to the ring for a handling class. Some had borrowed dogs from others, and although there was a fair bit of double handling as these are after all very big and powerful dogs, it was noticeable how each dog paced itself to the speed of the child, making it appear as if the handler really was in charge.

Every entrant received not only rapturous applause for their efforts but also a certificate of participation, a medal and a goody bag – a proud moment for each child, and quite a few proud parents ringside as well.

The judge for this event was Nello Vaccaro, the third of the Italian experts to support the event. Somehow this class encapsulated all that CACEP stands for; if the breed is to have a future it is these youngsters that will secure it.

Every dog taking part was given a magnificent trophy, depicting a Mastino head sculpted by Polish enthusiast Ryszard Kaminski, and there were beautiful presents also for the judge and honoured visitors.

It’s impossible to mention every one of those who helped to make the day such a success, but all surely went home knowing that they had played their own part in establishing CACEP UK as way forward for the Neapolitan Mastiff in the UK.